How Many Calories Should You Consume in a Deload? 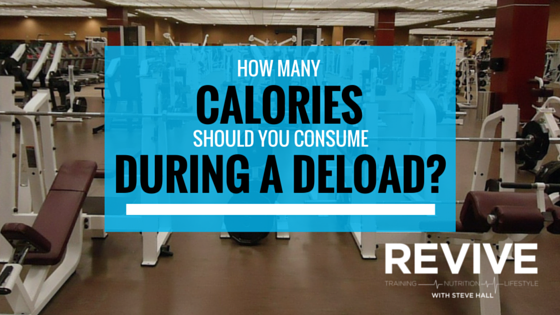 Eughhhhh it’s time to deload, we’re a bit beat up and tired…

But we know they need to be done, I mean they’re in the most successful programmes.

However, if we’re working less hard and are in the gym for less time, won’t we burn fewer calories? — So if we’re dieting couldn’t this take us out of a calorie deficit, and if we’re not trying to lose weight could it not lead to potential unwanted weight gain???

We should cut our calories.

What is a Deload?

Before we make our decision let’s look at what a deload is; a week(s) of reduced volume and or frequency. Or in others words; when we deload we do less work at potentially lower intensities.

Deload weeks can be set up in a multitude of ways, and different methods can be used at a variety times, but they’re always ‘light’ in comparison to our usual training. And by ‘light’ I’m not necessarily referring to the loads used, as they may still be fairly heavy, by ‘light’ I mean that the workouts are not fatiguing.

However, the single biggest contributor to fatigue is volume, so this must come down. [4]

Why do we Deload

Now we know what a deload is we need to know why we’re doing it, because it seems these weeks are in most popular programmes, so there must be some reasoning.

Think of your body as a bowl of grapes, every time you workout you take away a grape from the bowl, until eventually you have not grapes left. You’re scraping at the bottom of the bowl for grapes…bugger! Now you need to take a trip to the supermarket to re-fill your grape bowl…

Because if you leave it too long, you’ll get VERY hungry (because you only eat grapes).

You’re feeling pretty achy and your joints a little sore.

This is what is referred to in Sports Science as ‘overreaching’, a point at which your increases in fatigue are greater than your increases fitness, and this starts to bring down performance. [1] As you can see in the graph above, fitness and performance rise together initially with fatigue remaining level, but there becomes a point in which performance degrades due to rapidly increasing fatigue.

This is where your deload comes in; a period of time to refuel, repair, let your fatigue come down, to allow your performance rise and set you up for many more weeks of eating grapes (productive training) so you’re not left hungry (over-trained).

[bctt tweet=”Deloads are designed to reduce fatigue while conserving adaptations”]

Calories Burned during a Deload

So now we know what a deload is — a week of ‘lighter’ training and why we need to deload — recover and prevent overtraining, we can think about what calories would do.

Ask yourself the following question:

You see now why I had to take you through what a deload is and why we use them, because with that understanding you now realise what cutting calories would do.

I can understand why this would be a concern, especially for someone who is trying to lose fat, or maybe you’re gaining and don’t want to put on excess weight. However, let me explain why this isn’t really a concern; our total energy use (metabolic rate) comes down to a variety of factors (see the pyramid below):

As you can see our exercise (TEA) contributes little to our total daily energy expenditure (TDEE). In fact it has been found that a 90 minute, full body, resistance training routine where multiple sets of 10 reps with final set taken to failure burns 200-400 kcal on average depending on body size. [2]

So you can see there are 800 fewer calories burned in the deload week from exercise alone, however, we must remember in those 60 minutes we’d normally be training, we’re still burning calories.

Sure we probably won’t be burning as many as when we workout, but its not like we suddenly switch off, we could easily be burning 50 to 200 calories depending on our size and what we’re doing. Walking down stairs has been shown to burn a comparative number of calories to weight training. [3]

Thus we can see that exercise actually doesn’t contribute very much to our total caloric burn, and so it isn’t really a concern.

Adjusting Calories on a Deload

The calories we burn do not drastically change during a deload week compared to a normal week of training — maybe we burn a couple of hundred fewer calories…not enough to really worry about.

So is there any need to adjust calories at all?

Now think when we’re dieting we are continuously eating less than we need, thus recovery is hampered more than ever. So deloads become MORE IMPORTANT and dropping calories would be a bad idea and it will lead to the following:

All of the above will in the end lead to more potential muscle being lost and in the long run fewer calories burned, you know what that isn’t good for?

So you reduced calories in your deload to help burn more fat, but that simple act has reduced your ability to burn fat and increased your chances of muscle loss. Calories should not be reduced during a deload, but doing so it will hamper your recovery and in the long-term degrade your progress.

In a recent conversation with James Krieger (from weightology) we talked about doing deloads every 4 weeks when dieting and in that fourth week you actually increase calories to maintenance.

The point being to act as a diet break and have an even larger reduction in fatigue.

Now what about when we’re trying to gain lean muscle, we’re only in a slight surplus, so we can get big but stay lean.

My opinion on this has changed over the years, I had kept Calories level but now I like to see them come down to maintenance levels. This is because both my deloading and massing approaches have become more aggressive, and thus volume comes down a lot compared to the week prior to deload and the surplus is assertive, making coming to maintenance a good idea during the deload to avoid fat gain.

Calories during a Deload in Summary

Do you need any help with the above? Do you have any questions you need answering? Do you need more clarification on deloads?

Join my free facebook group or add me on snapchat (revivestronger) and ask your question there, I will respond asap.

If you want to learn more about how planning your workouts could lead to better results please read: Periodisation for Progress

Do you have a friend who you think needs to take deloads or could be training too hard (or soft)? Share this article with them and let me know what they think.

[bctt tweet=”How Many Calories Should You Consume in a Deload??”]