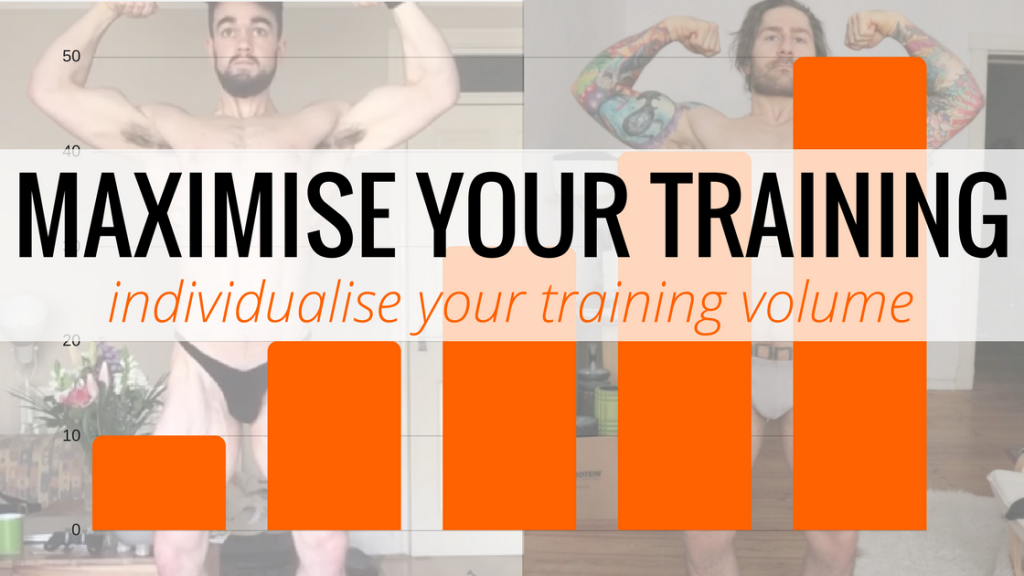 You want to maximise your training right? That means you need to get the right dose of training volume.

Well I would like to introduce Coach Pascal’s first article for the website, and it’s a cracker at that. We get a lot of questions about ‘how much volume I should be doing’ and above the general recommendations (that you can read here) we can’t be of much more help. However, now we can, because Pascal shares some of the tools we use in our own and clients training to ensure they’re getting the right dose of training volume.

So without further ado, take it away Pascal…

1.] What are some fatigue indicators?

2.] How to make use of them for your training

To make progress we have to progressively overload our training, most often this means we’re trying to overreach in which fatigue rises and then we recover to make adaptions.

But how do we actually now that we’re overreaching i.e. in a fatigued state?

Are there any methods we can use to determine where our body is currently at?

In the past decades, sports scientist have tried coming up with different methods to track fatigue and how to use those methods to make the athlete overreach, followed by bringing fatigue down again. Many different sports are based on the accumulation of fatigue to the point in which an overreaching took place was forced to adapt due to a super-compensation. 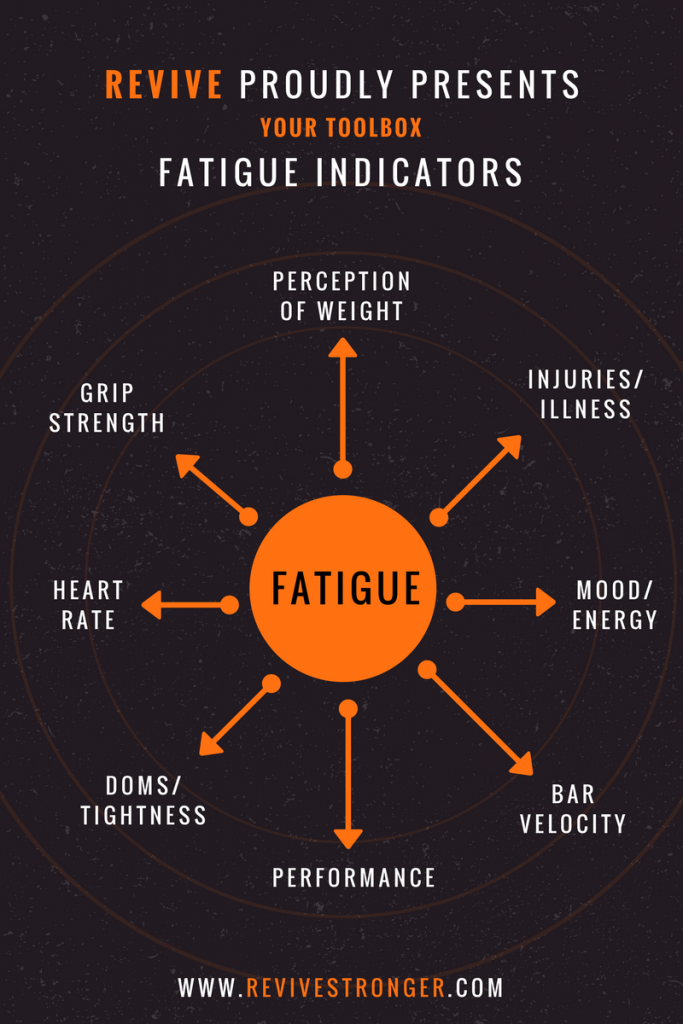 When you’re reading this you probably don’t have a team of sports scientists around you who are tracking your state of fatigue. So how do you actually know when you’re overreaching and your fatigue accumulated to the point in which everything you do on top of it is a waste of time, leads to further accumulation of fatigue or even causes a loss in performance?

Let me reiterate the principles of the Fitness-Fatigue Model (FFM).

The FFM is based on the “General Adaption Syndrome (GAS) Principle” which is also known as the Single Factor Model because it only looks at recovery and doesn’t take fatigue into consideration. What this means is that if we were to look at our progress in the gym it would only be dictated by our recovery, so basically, if we simply were to relax a little bit more, we would see our progress to rise again. However, this isn’t how people work and training isn’t the only stressor that causes fatigue.

Now the fitness fatigue model includes different factors and looks at fitness and fatigue separately. It provides the difference between the two and gives us our level of preparedness, which is simply our ability to perform at our best.

For example let’s say fitness represents our volume, the higher our volume the highest our fatigue will be. As we drop our volume the fatigue will reduce as well up to the point in which fatigue drops near baseline. Due to fatigue decreases quicker than our fitness we’re now able to either step on the platform, do a 1RM test or start a new mesocycle in which we start overreaching again.

This covers some of the main principles of a taper for a meet as well. 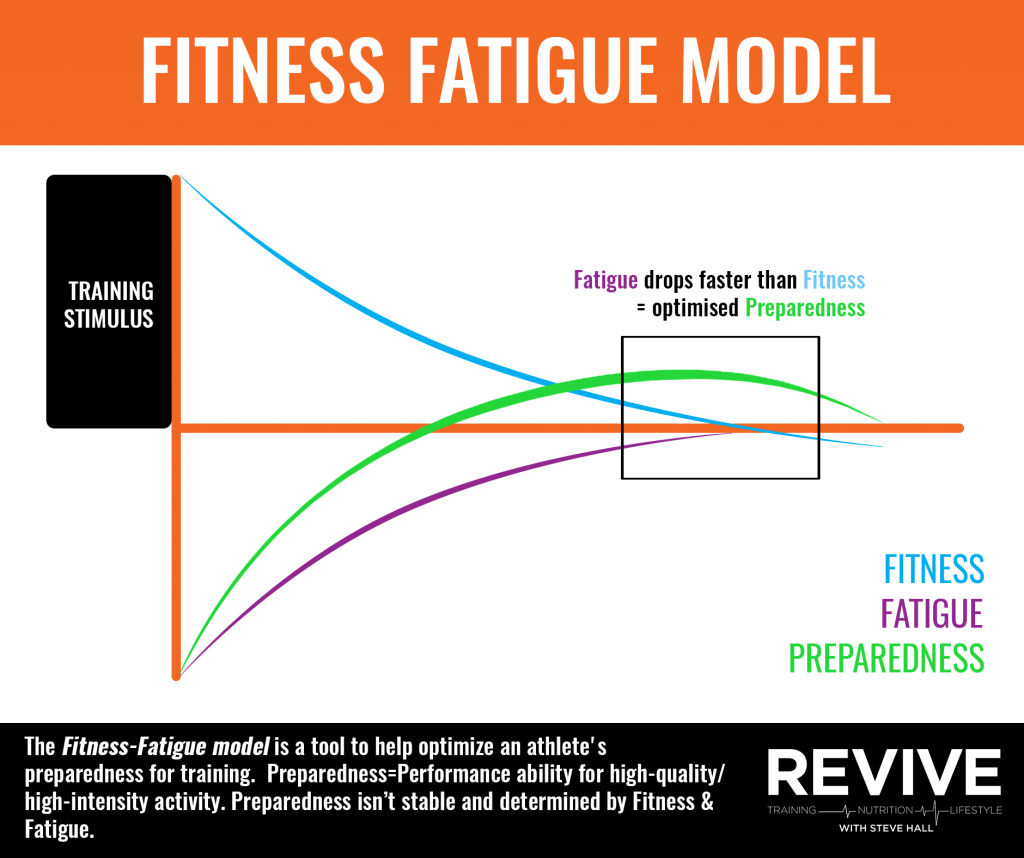 So far so good.

Now that you’re aware of the principles of the FFM, let’s move finally move on to the Fatigue indicators…Ok, hold on. There’s one thing I have to tell you first. Generally you have to categories fatigue into 3 groups:

2.] Stage -> Contemporary Stage
When fatigue is present and needs to be taking care of.

Fatigue has been high for a long time already and you need to do something about it immediately!

All of the stages above are signs of a high/-er fatigue level. Nonetheless, they can be used to your advantage or as a means to avoid running yourself into the ground. But let me finally give you some indicators, the later the stage the more severe the signs of high fatigue get and the more indicators become present.

While you’re accumulating fatigue you’ll find yourself in this state most of the time. Fatigue accumulates slowly without any severely noticeable indicators. You’re most likely still able to push yourself hard and progress in the gym.

If you’re thinking about a 5-week mesocycle, this would be an optimal spot to be in on your 3.rd week. You’re finding yourself slightly below your Maximal Recoverable Volume (MRV) and started accumulating decent fatigue already but still you’re able to recover enough so that you see an increase in performance.

Signs of fatigue could potentially start to show with the following symptoms:

Under MRV->Fatigue starts to accumulate

Take an honest evaluation if these indicators are caused by fatigue or if there are any other reasons for them to occur. For example, if you’re someone with untypically low testosterone levels, you might experience some of these indicators despite the fact of being fatigued or not. However, if fatigue is the actual reason for you feeling lethargic or you having a hard time concentrating, you can already start making some adjustments to your training/nutrition/lifestyle before it get’s too high.

You’re now in the phase of overreaching/super-compensating.

This is a good state to be in every once in a while. However, when you’re staying in this stage for too long all the already mentioned indicators will accumulate over time which then most likely leads to a stall in progress or even a drop in performance. In addition to that, some of the following indicators will probably show creep up.

When you’re experiencing any of the signs below, a deload might be appropriate after your current microcycle or at least somewhere in the near future to bring down fatigue and to collect the sweet benefits of the past weeks.

At or slightly above/below MRV

Fatigue indicators could be:

The indicators of the contemporary stage can occur on a daily basis and can easily be influenced by factors outside of the gym. So for example, when you’re simply not in the mindset of moving heavy weights, the perception of weight can be totally different to days in which you want to rip the head off of everyone around you. Same goes the over way around. A high carb intake, together with a lot of caffeine can potentially disguise the signs of fatigue and let you performe better than expected without showing the real level of fatigue.

So again, be honest with yourself and keep an eye out for the mentioned fatigue indicators.

Ok, this is the stage you’re trying to avoid.

When you’re at this stage you either pushed too hard for too long or a lot has been going on in your life currently. Anyway, when you continue being in that stage and you’re not taking care of your fatigue levels immediately, you will not only experience all the indicators mentioned above in a much more present state but you’ll most likely experience some of the following things as well.

Fatigue indicators could be: 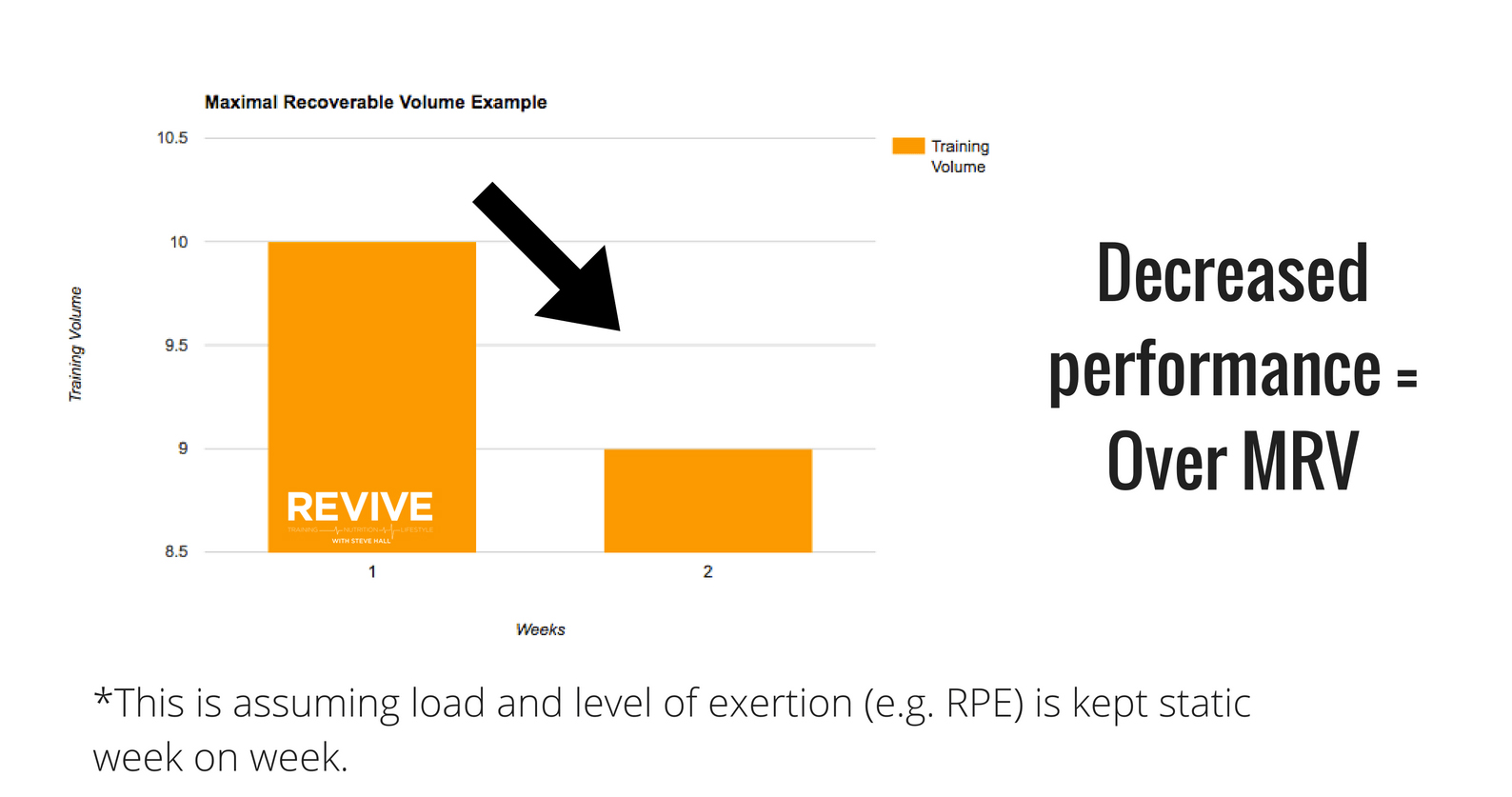 Over your MRV. Best to take care of the accumulated fatigue as soon as possible.

You can see why you want to avoid being in that stage for too long. All of the mentioned indicators will be massively counterproductive for your progress in the gym and long term goals.

Will you do your best progress while being injured or ill?
Or have you ever been highly focused when you were massively stressed and sleep deprived?

Probably not…and if so, please tell me about your secret.

When you’re experiencing more than one of those indicators it’s time to do some adjustments instantly.

Not all of the mentioned indicators are only dictated by high levels of fatigue.

For example appetite suppression, not everyone who isn’t hungry has high levels of fatigue and vice versa. I’m constantly hungry and is my fatigue constantly low? Absolutely not.

Furthermore, we need to remind ourselves that those indicators are only a couple of tools in our toolbox and not the be all end all to determine our fatigue levels. They will be highly influenced by different factors and especially by the mentality of the user.

Do you know the “Nocebo effect” as well?

Let me give you a quick explanation: 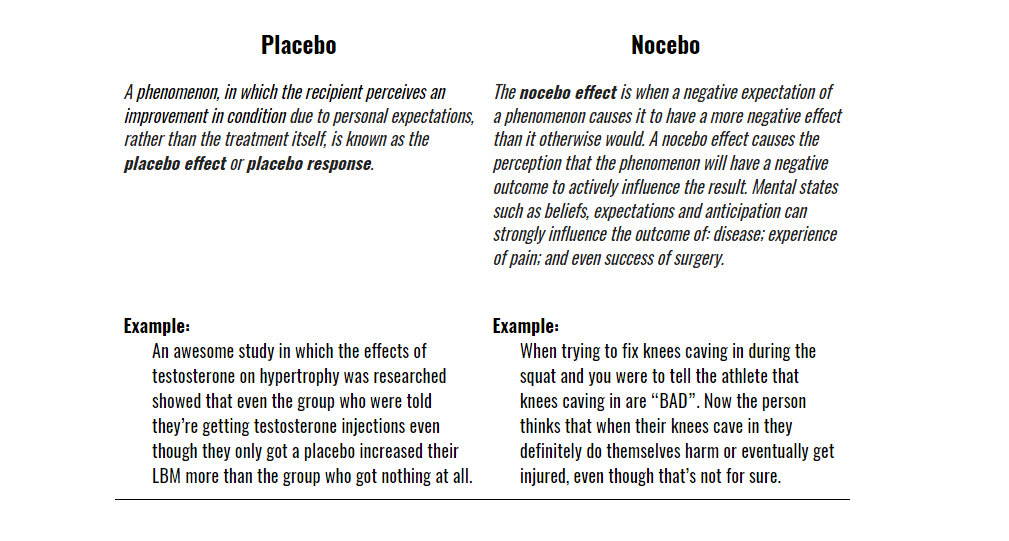 Both placebo and nocebo effects are presumably psychogenic but also produce measurable physiological changes as well as changes in the brain, the body, and behaviour.

What does this have to do with our fatigue indicators?

Let’s say someone measures their daily Heart Rate Variability (HRV) first thing in the morning. Depending on if it’s normal or high, the person could then be influenced by the readings thus performing better or worse because he thinks he’s fatigued (or not) even though this may not be the case.

Using some of the fatigue indicators as a guide on how you’re recovering is sometimes kind of the same like when it comes to autoregulation and rating RPE/RIR. For some, this is simply the wrong tool because they’re either holding themselves back or “lying” to themselves.

How to make use of the indicators?

Okay, now you know basically a lot about fatigue, what signals you can look out for and what the potential downsides are. But how can you make use of it and implement it for your training and nutrition?

Well, first let me give you a rundown on what’s important when you’re trying to take them as a reference:

Based on the given information you now have another powerful tool at hand. You can use the fatigue indicators as a guidance to find your Minimum Effective Volume (MEV), Maximal Adaptive Volume (MAV), Maximal Recoverable Volume (MRV) to create a rock solid training programme. This will allow you to make adjustments and individualise your training plan along the way so that you’ll get the most out of your time spent while improving as an athlete.

Lastly, if you find yourself in a state of fatigueness and would like to bring it down again, then I want to give you a quick overview on things you could do to bring down your fatigue.

Those methods are not mutually exclusive and can be combined with each other.

I’d even recommend you combining them. Like for example, when you’re deloading, why not give your body a full break and bring your calories back to maintenance? The intent of a deload is to bring down fatigue to set yourself up for the next mesocycle. 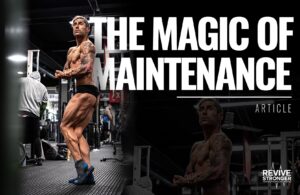 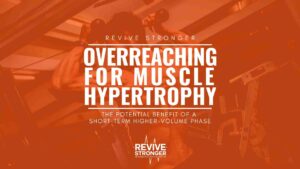 Overreaching for Muscle Hypertrophy: The potential benefit of a short-term higher-volume phase 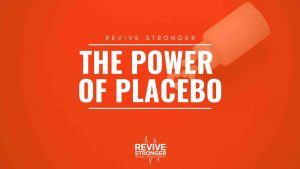 The Power of Placebo﻿

PrevPreviousDoes the ‘Fat Gene’ exist?
Next3 Fatal Flaws with MRV for hypertrophyNext