3 Fatal Flaws with MRV for hypertrophy 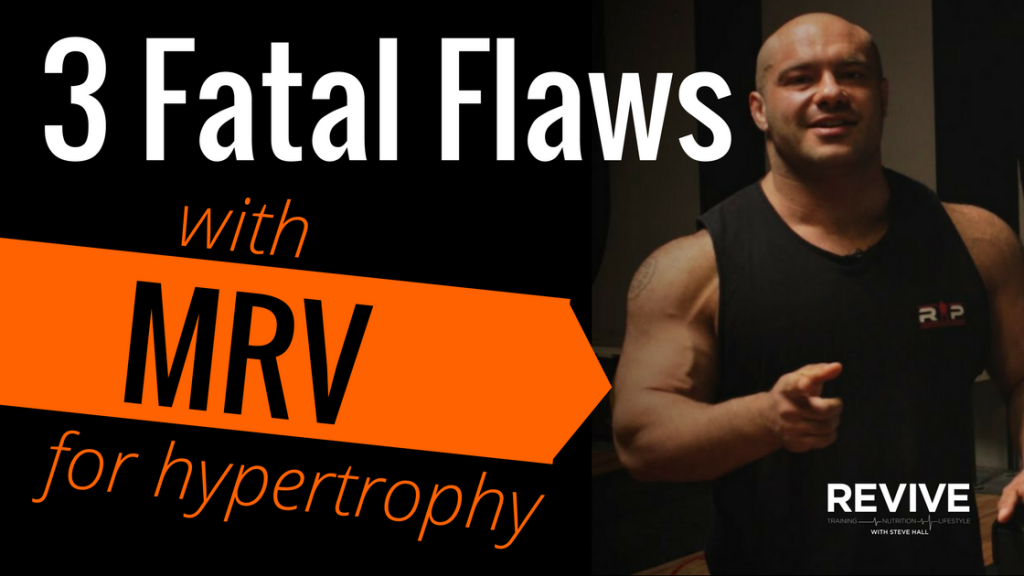 Shuddahh, gasp, Steve Hall who many might think is an understudy of Mike Israetel (who coined MRV) is going against it?

Like any great concept, there is always going to be flaws. In fact, just like a beautiful man or woman, often the flaws are what make them extra special…right? Well regardless, I am here writing today about some major flaws I see with the concept that is MRV. These need to be addressed if people are going to get what they need from using it.

Yup Mike ya fool, you should have called it something else.

Time and time again I see people get the wrong end of the stick, just because of the darn name. People see ‘Maximal’ and forget all about ‘Recoverable’ and this means they view MRV wrongly; they see it as something that promotes ‘more is better’, when in reality it’s ‘enough is better’.

I’ve got to admit even when I first heard about it I thought it was encouraging people to do more volume, but after reading into it more and talking it over with the Dr. himself I’ve learnt to understand this isn’t the case. In fact me and Mike have talked on the podcast addressing this exact thing, he actually came up with it to make people realise they can’t just add more, there is a limit to the amount you can do.

So this is the first fatal flaw, the name, not because it’s a silly or untrue name to use, but because people mis-interpret it time and time again. So maybe Mike should change it to ‘the amount of volume you can do & recover from’ < but that just doesn’t sound so sexy does it?

Learn what MRV really is > READ THIS

2.] The Numbers Don’t Stack Up

That’s right, the numbers, those damn set numbers, they don’t add up.

When we’re using MRV we’re often referring to a number of sets per a given muscle group per week. 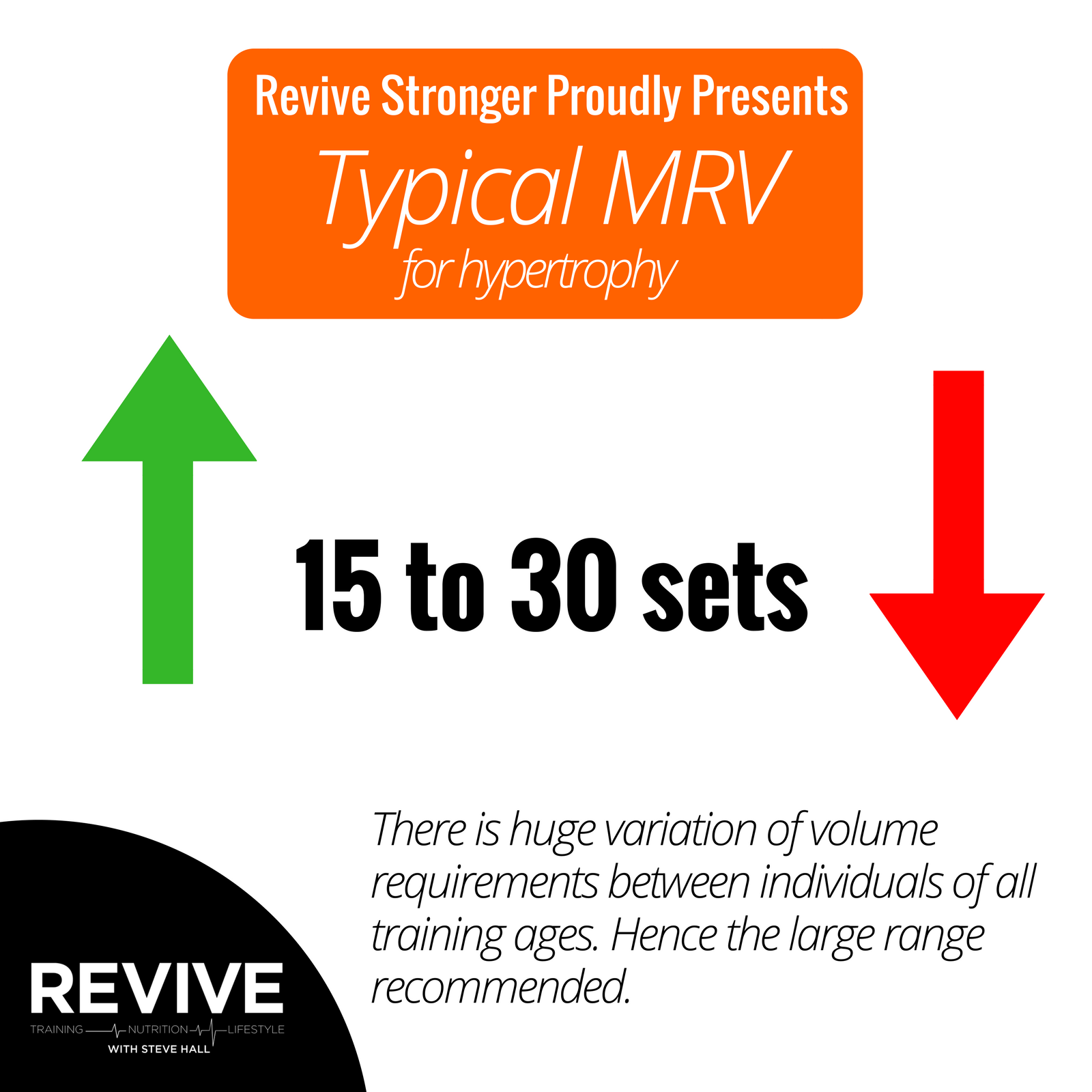 These of course are just general starting points based off client data, the scientific literature and personal experience. However, people get really caught up in these numbers, they think there is something inherently magic about them and don’t understand how not only do they differ person to person, but also overtime.

The thing is two people could require totally different amounts of volume, this may depend on their genetics, training history or even just their current lifestyle. However, people often forget to individualise their training, and they see these goal posts and try and aim for them, rather than aiming for their own individual MRV.

Furthermore, the goal-posts move overtime, you can also do more depending on the intensities you’re using, the exercise you’re performing might cause you to be able to do more or less etc. etc. as you can see, there are many factors involved, that need to be taken into account.

So this is fatal flaw number 2, Mike you should make everyones mesocycles for them and make sure they’re working towards their MRV at that specific time. Damn it man, or what you could do is read the following:

2.] Individualise your training volume – READ THIS

We have a systemic MRV (whole body’s ability to recover) and individual muscle group MRV.

The thing is getting an actual number for each muscle is impossible, and this confuses the hell out of people. For example, when doing 3 sets of deadlifts how do you place that volume? There are loads of muscle groups involved, some prime movers and others just assisting in the movement.

You see the problem, when we’re doing multi-joint compound lifts we’re using several muscle groups at once. Either we only programme in isolation movements, or we’re left thinking ‘do I attribute a given % to different muscle groups for a movement?’ < now that would be a pain in the ass right? So this is the fatal flaw here, it’s impossible to know our exact MRV for a given muscle group.

However, is this a problem? In my eyes, no, not at all. It’s only a problem if you let it confuse the shit out of you and get overwhelmed. What I do, our clients do and I believe Mike himself does is to set things up like the following:

The above are how your split your body up, or at least could be, you could go into even further detail and split out traps, forearms etc. etc. But I think the above for most is totally fine. What you then do is attribute exercises to their prime movers, for example a set of high bar squats counts towards quads but a romanian deadlift counts to the Glutes/Hamstrings. Yes there is overlap, but because we start out with a conservative number of sets (our Minimum Effective Dose) at the beginning of our mesocycle we can use our feedback/performance to adjust volume progressions moving forward.

Thus again we solve the problem by starting with the very solid recommendations set by Mike Israetel and then progressing these via our real world response. Just like if you set a Calorie deficit via a calculator you’d adjust things given how your body responded, maybe adding or subtracting more Calories depending on how you dropped weight. In the very same way you can start with a lower set number and progress according to how you’re performing in the gym.

As you can see, I have just signed a death wish and the mighty Russian that is Mike Israetel is most likely now going to hunt me down like in Season 4 of Dragon Ball Z androids hunt out the Saiyans. Well, not really because in reality what I have pointed out are more so common misconceptions and confusions with what is a very solid training concept.

The key here is two fold:

—– don’t assume or jump to conclusions without knowing the facts.

2.] Take concepts like this with a pinch of salt

—– start with some conservative and logical positions and adjust accordingly.

Hopefully now you can get more out of your training and I have cleared up some of the flaws people experience when trying to utilise MRV and it’s surrounding ideas in their training.

Did you know Mike is coming to London?

295: Charly Joung – From Powerlifter to Bodybuilder

224: The Improvement Season – What To Do When You Think You Need A Break